Finally I got the chance to go out.  I had to cancel one trip due to bad weather and last weekend had shit weather as well.  So this weekend I was able to do an overnight in Indian Heaven Wilderness.  I planned a loop using the PCT as a backbone and also using part of the old Cascade Crest Trail.

I saw a few of the old PCT blazes.  Other than tracks and scat, this heron was the only animal I saw the entire time.

When I started the hike, I met this hunter with a crossbow.  He showed me the different tips including the bone crusher.  He said he liked “stalking”, that’s why he has the crossbow and not a rifle.  He said the sidearm was for cougars.  Friendly enough guy,  and I bid him adieu.   About 50 yards up the trail I was filling out my wilderness permit and checking out the info on the sign.  I turn around and that motherfucker was *right* behind me.  He said he didn’t mean to scare me, I know he was full of shit. 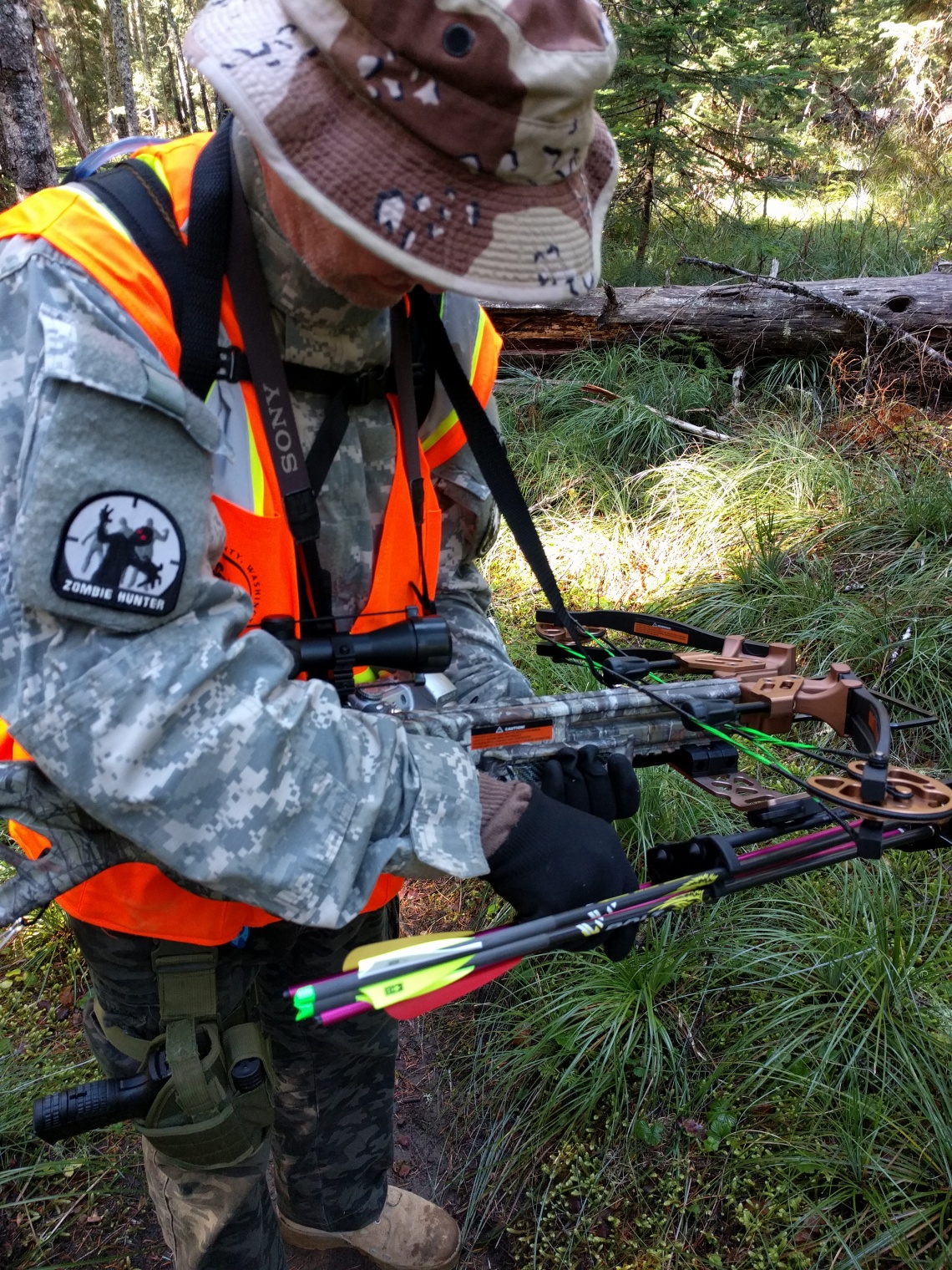 I hauled ass up that trail, making sure the Zombie Hunter wasn’t following trying to creep me out.   The trail to Gifford Peak by way of Basin Lakes was beautiful, but difficult to follow in places.  There was no real switchback up to the ridge that connects Gifford Peak and Berry Mountain, the trail just went straight up.  After that it was smooth sailing. 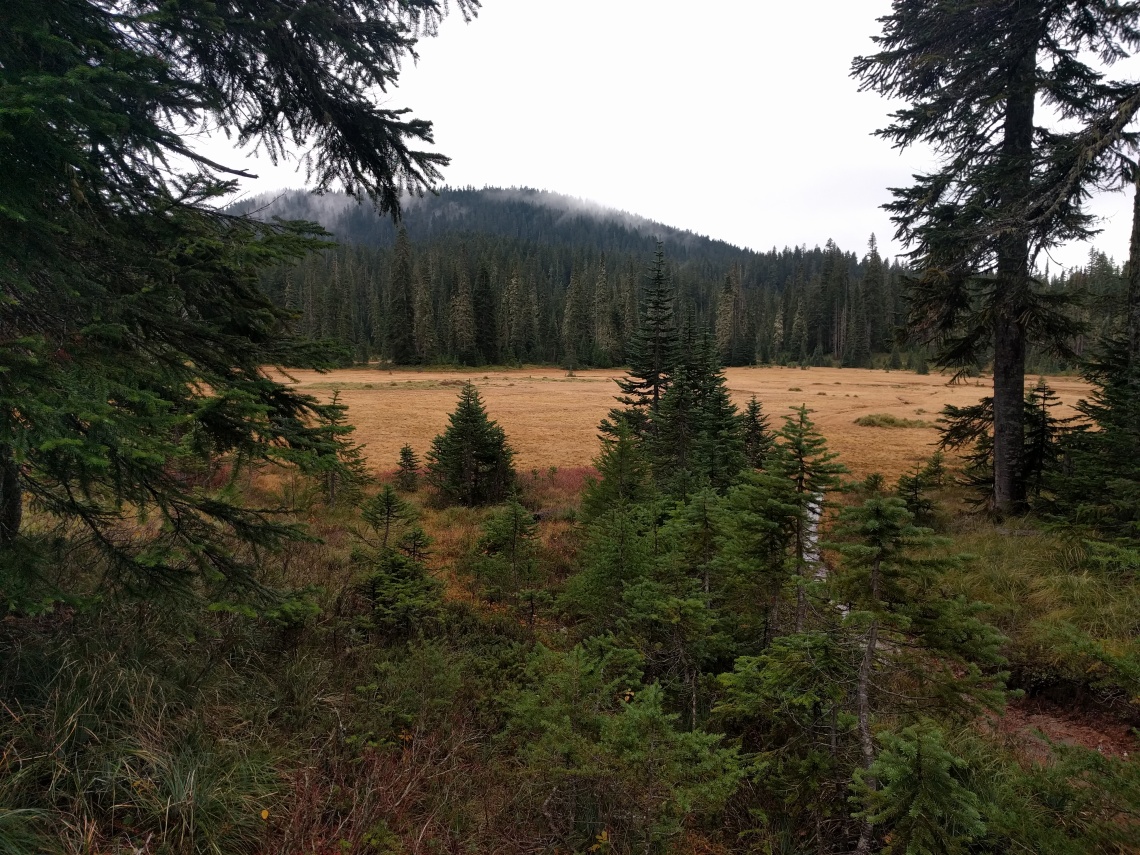 This area is known for its meadows, lakes and old volcanoes.  The weather wasn’t all that great, but who cares when you can hike in an area like this and see hardly anyone else.  Amanitas were everywhere as well as tons of other mushrooms. 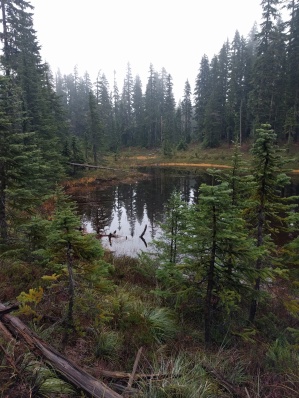 I was surprised to see some other backpackers already camping at some of the numerous lakes.  I found a good spot as the sun was setting and had clocked about 9 miles.  Camping when the days are short like this is boring as fuck.  Luckily I fell asleep around 830 or so. 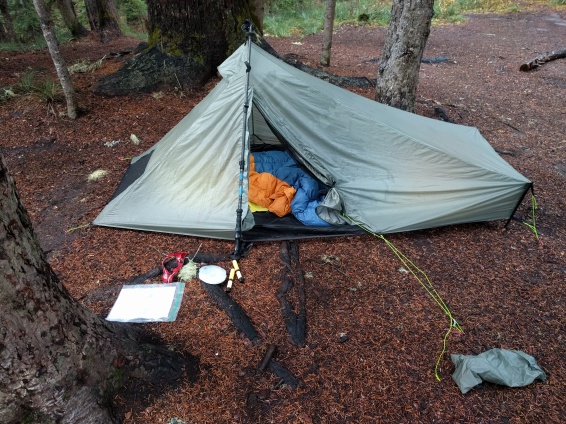 The next day on the way back I took a different route down to Indian Racetrack from Berry Mountain.  It was a mistake, because it was *just* off my map making it confusing to navigate the trail junctions.  It was much more difficult to navigate than I thought it would be.  Since my piece of shit compass gave out, I figured things out using the sun and logic but not before having a few moments of doubt and anxiety. 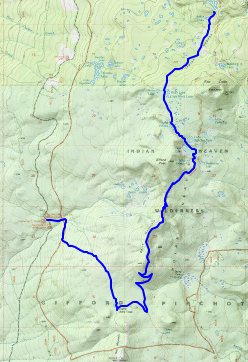 Down low, there was tons of flooding and not just where you can see water in the meadows, the whole area is sopping wet.  I had to find my way here, where normally there would be a big meadow and clearly delineated trails.  It was harder than it looks, I’ll tell you that much.

For all the shit that people talk about waterproof shoes, they sure as shit did the trick on this trip.  The trail from Indian Racetrack back to the trailhead was a flowing stream at times and standing water at others.   Many times I had to avoid the trail altogether: 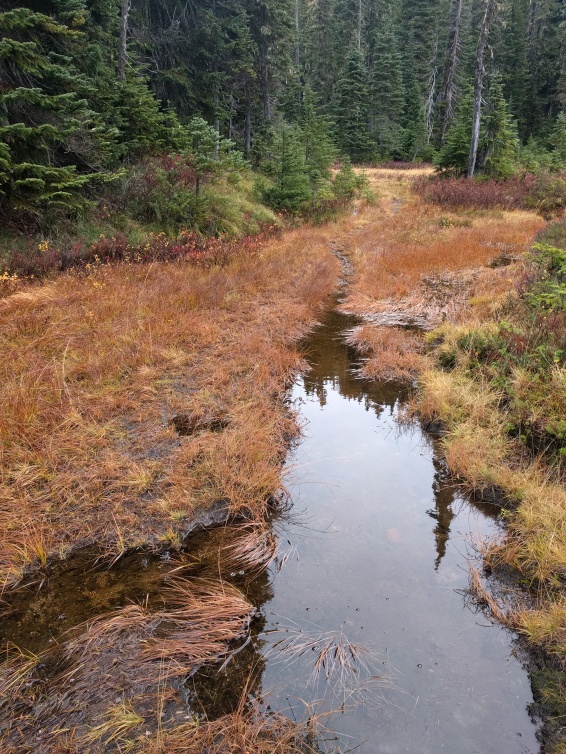 This area’s pretty stunning and I really enjoyed not running into many hikers at all.  I finally got my dose, as I haven’t backpacked since Labor Day.  This is why I think fall is really the worst season to backpack in the PNW.  The weather can really fuck up your plans, but its not quite cold enough for snow fun yet.  Till then, I’ll still be getting out into this dreary, spooky weather with no crowds. 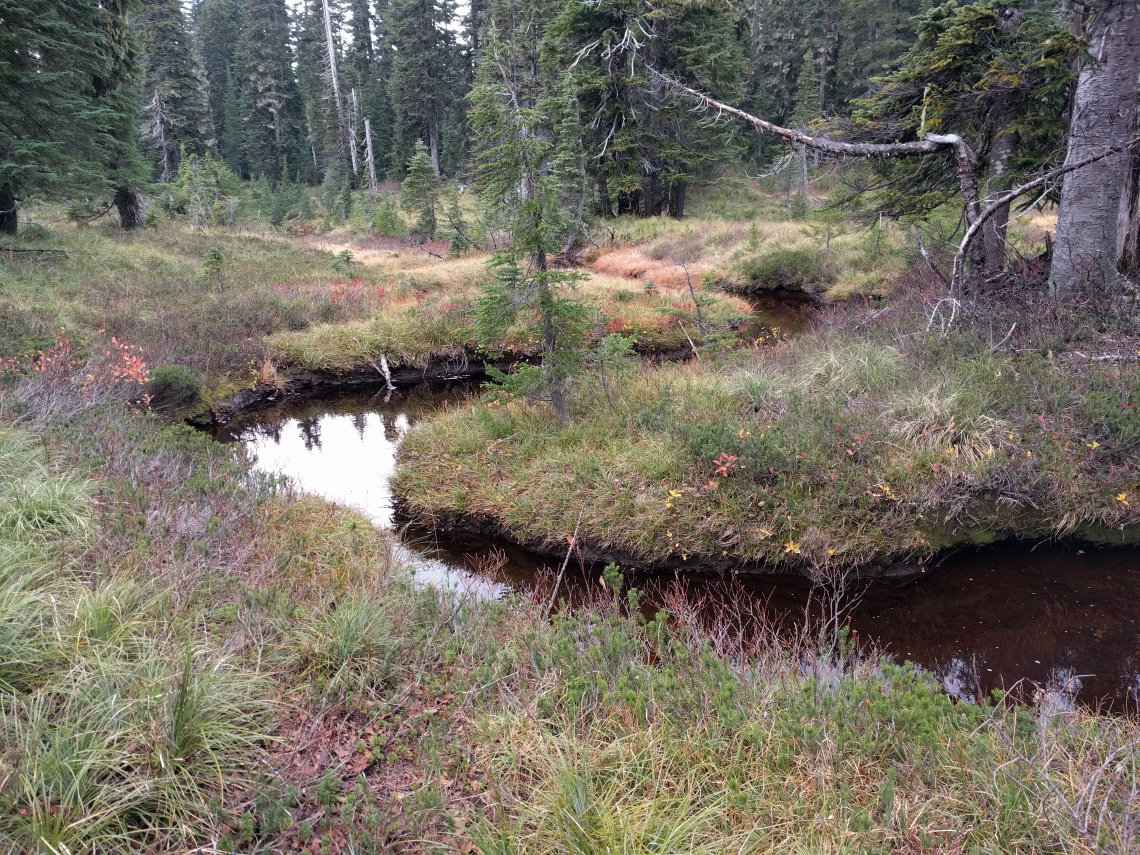