At REI I was walking around aimlessly wondering how to combine my dividend and a 20% off coupon.  I didn’t really need anything, but though it may be nice to get a summer sleeping pad thats lighter than my warm, insulated, winter pad (Exped Synmat UL9) that I use year round (and bought at a steep discount).

One of the REI workers saw me and another guy looking at the pads.  He invited us to watch him blow up a new pad made by thermarest that you can just blow up by blowing air directly into to it through a big hole.  He asked us to guess how many breaths it would take.  I guessed 6, the other guy said 10.  We watched in amazement as the REI worker blew in THREE strong breaths and filled the damn thing to capacity.  He then rolled up the valve a few times and said that’s how you make the pillow for it (wrong).  And then he let us lay on it and test it ourselves.  There’s also a valve where you can let air out if necessary.  The act of deflation nearly knocked my socks off… it deflates within seconds.  I fucking HATE trying to deflate a mat where you have to squeeze the shit out of it to get enough air out to be able to pack it back up into the stuff sack.

Here’s a shot of the “pillow” the guy said was another feature.  That is completely inaccurate, do not do this with your mat:

I have to say, rarely can someone talk me into buying something like that on the spot.  With my dividend and the 20% discount, the pad was actually affordable.  I was actually kind of blown away.  I have a little hand pump for my Exped mat, which requires that I mush the pump about 160-180 times to get it full.  That only takes a few minutes, but you can see the attraction I had to the new Thermarest SV valve.  The quick deflation really sealed the deal and I walked out of REI with the mat.

Here’s a pic of the valve in full deflation position.  It deflates instantly.  Note the “valve” is really just black garbage bag plastic in a funnel shape.

However, when I got it home, it always took me around 10 breaths to get it full.  I also found out, you can’t really make a “pillow” with the valve because you’re supposed to fold the damn thing over 7 times.  I figured that the REI guy could do it in three breaths because there was already air in it from him blowing it up and deflating over the course of his shift.  I felt a little foolish and impulsive.

Then in the field, like many others have posted on reddit and BPL, is that the damn thing would lose air overnight.  However, it would lose air inconsistently.  I had a trip where it was fine… the next one it lost air.  I let my partner use it one weekend and it lost air.  I used it on my next trip and it was fine.  I used it another night and it lost air again.  We could never find the leak, but sometimes the leak wouldn’t leak, either. I just decided I’d return it to REI… as did many others which I will revisit in a later paragraph.

Then somewhere, either on reddit or BPL someone mentioned that the valve has to be rolled up in a very specific way.  I cannot find this post, otherwise I would link to it.  The “valve” is basically garbage bag looking plastic material.  As you blow up the mattress, this valve somehow funnels in a larger volume of air from your breaths from the surrounding airspace.  As the mat becomes full of air, the “valve” kind of blows back a bit towards you, indicating that you need to stop.   Then you press the black strips together to seal it,  roll it up seven times and buckle it underneath.  The important thing is that all of the black garbage bag material is well inside the mat, none of it can be in the area of the two black strips or hanging out the front.  If you don’t do this properly, a slow leak will develop.  As you roll it up, make your first fold over towards the yellow, not under towards the gray and continue that way.  Check out the pics and read more details in the captions:

This is when you know its full, its difficult to blow anymore air in. 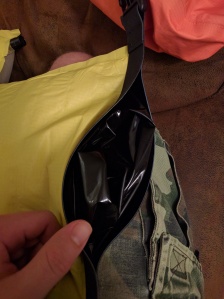 If it looks like this, you need to stuff the plastic valve in more. 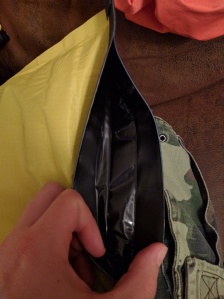 Perfect. The two black strips will now be pressed together and rolled up 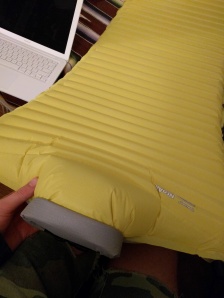 Rolled up 7 times, buckled underneath

A view of the buckle underneath

After learning this “trick” I haven’t had an issue with this pad since.  It’s warm, lighter than my winter pad, and the crinkly noise isn’t nearly as bad as I thought it would be for myself or others sleeping nearby.   It does inflate quite quickly, and deflates in a heartbeat.

At this point to inflate the pad, I give it six strong breaths.  I roll it up properly, with the black plastic material all the way in.  I roll it up 7 times and buckle underneath.  I use the normal valve to top it off if needed.  Done.

To deflate, I open up the valve while I’m still on top and it sounds like a loose, airy, fart.  Done in seconds.  Roll up, and put in the oversized stuff sack.  You will never have an issue fitting it in.

I understand some people don’t want to fuck with it and want something that isn’t as finicky, like the Neoair without the SV which is way lighter, any other pad with a regular blow up valve, or any pad with a big blow up bag like the Exped Schnozzle or an MYOG pump bag.   This may be the only pad I can think of that really needs an instruction manual LOL.   I totally get that you wouldn’t want it because I nearly returned mine until I saw the post that taught me the “trick”.

So, there is a silver lining here.   The truth is, the mat works.  However, because of the issues with the valve, people (myself included) thought it was defective.  They brought them back to REI.  I went to this past weekends garage sale at the very end when all the good shit is normally gone and there were two Thermarest Neoair Xlite MAX SV’s there, heavily discounted.  The reasons?   The tags said “leaking from somewhere- will not hold air” and “slow air leak”.  I knew that they were likely perfectly functional, did a quick test and bought another for my partner to use (her big agnes bit the dust).  I left the other one because I felt that would be greedy.

So for the bargain hunters out there, keep an eye out for the returned ones!  You may score a perfectly awesome mat for a very good price!

Since the last time I checked, thermarest appears to have become aware of the problem and addresses the valve issues in the videos here.