Last year I wanted to do more bike trips but never really got around to it.  I’ve had hankering to do the Klickitat Trail, an old railroad bed turned into a trail in Washington for quite sometime.  The trail starts in the town of Lyle, WA and goes north following the canyon to the town of Klickitat.  Here you can pick up the trail into Swale Canyon, which feels more remote and much stranger than anywhere I’ve hiked or biked before.

Once Swale Canyon mellows out into wide open steppe, the trail ends.  The trail itself isn’t a loop, but a 31 mile out and back.  That doesn’t mean that you can’t make your own loop, however.  There’s nothing but dirt roads out there, so I climbed up the back of Dalles Mountain and descended a few miles down to the highway and back to the trail head in Lyle for a total of roughly 52 miles. 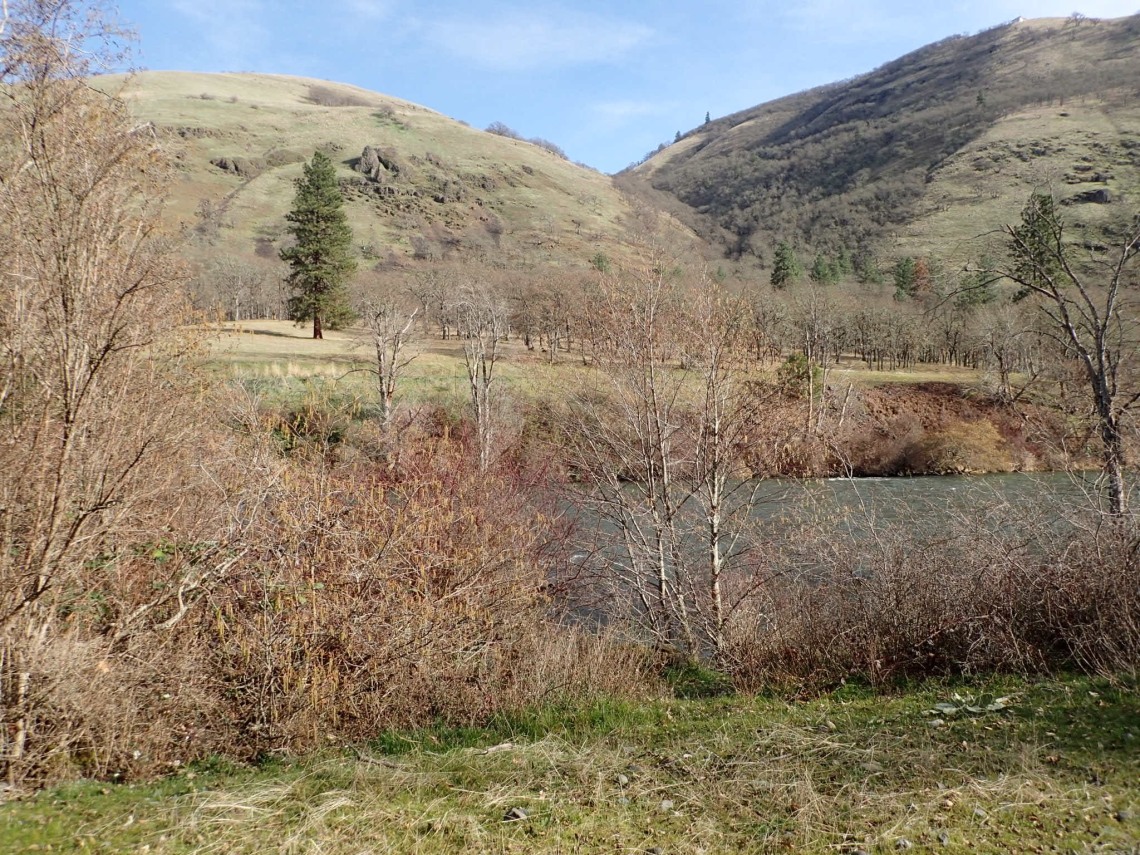 There’s some parts to the Oregon Desert Trail that make more sense to do by bike, and I wanted to use this trip to get my bike packing shit together and learn to dial my gear in.  I needed a good shakedown trip and to learn how my body would respond.

To my surprise, some of the trail was a real trail, not a dirt road like another rail to trail I’d been on before.  Some of the gravel road was pretty damn chunky and was slow going.  My bike doesn’t have suspension, so I took the shock in my wrists, spine and ass bones.  The fatty tires help, but I could go fatter I think.

On the map, it looks like the Klickitat portion of the trail connects by bridge to the Swale Canyon portion on the other side of town, but it sure as shit doesn’t.  All that’s left of that trestle is the concrete footings.  I had to take the paved road for awhile to reconnect with the trail and it felt like heaven.  One part had a pretty nice descent and my hands got a little fatigued from riding the brakes.

I continued on the Swale Canyon trail, which was a pretty weird place.  There were a bunch of old, run down cabins and trailers everywhere.  Parts were littered with old cars and metal trash of different sorts.  One cabin even had an ocean going vessel on supports in front of it  I have no idea how in the world that boat got back there given how far we are from a decent road, much less the ocean. 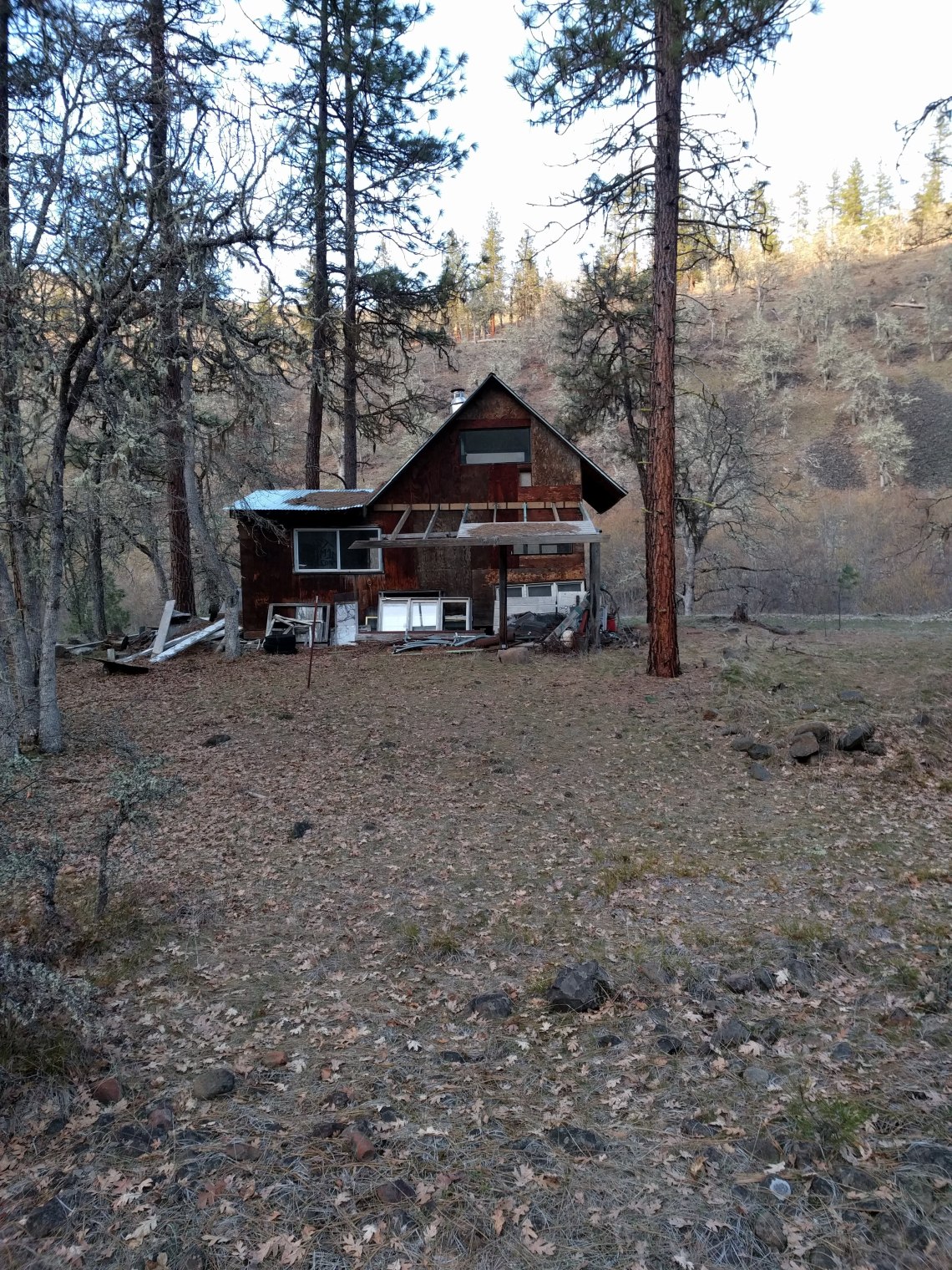 I had that feeling that some the locals don’t take to kindly to people riding through.  The website for the trail warns about encounters with salty locals so I wasn’t keen to meet any, especially since I am small, alone, armed only with wit and charm.  Apparently some locals weren’t down with the trail being built to begin with.  One thing is certain about this county, the local sheriff is a fascist.  In Klickitat County, you’ll see signs like these:

How welcoming.  If Sheriff Bob Songer puts signs like this up to intimidate and bully local residents you know damn well not to fuck around in this county if you’re from out of town.  A person in power willing to bully those suffering from addictions is a true coward.

After awhile, the cabins give way to uninterrupted nature.  At the end, the canyon gives way to the open steppe of Eastern Washington.  I slogged up Dalles Mountain, often having to walk my bike because I was so worn out.  It was pretty steep in some places, muddy in others, and sometimes icy.  Sometimes all three.  My ass was killing me, my hands were hurting and my shoulders ached.  I just wasn’t in that great of cycling shape yet. 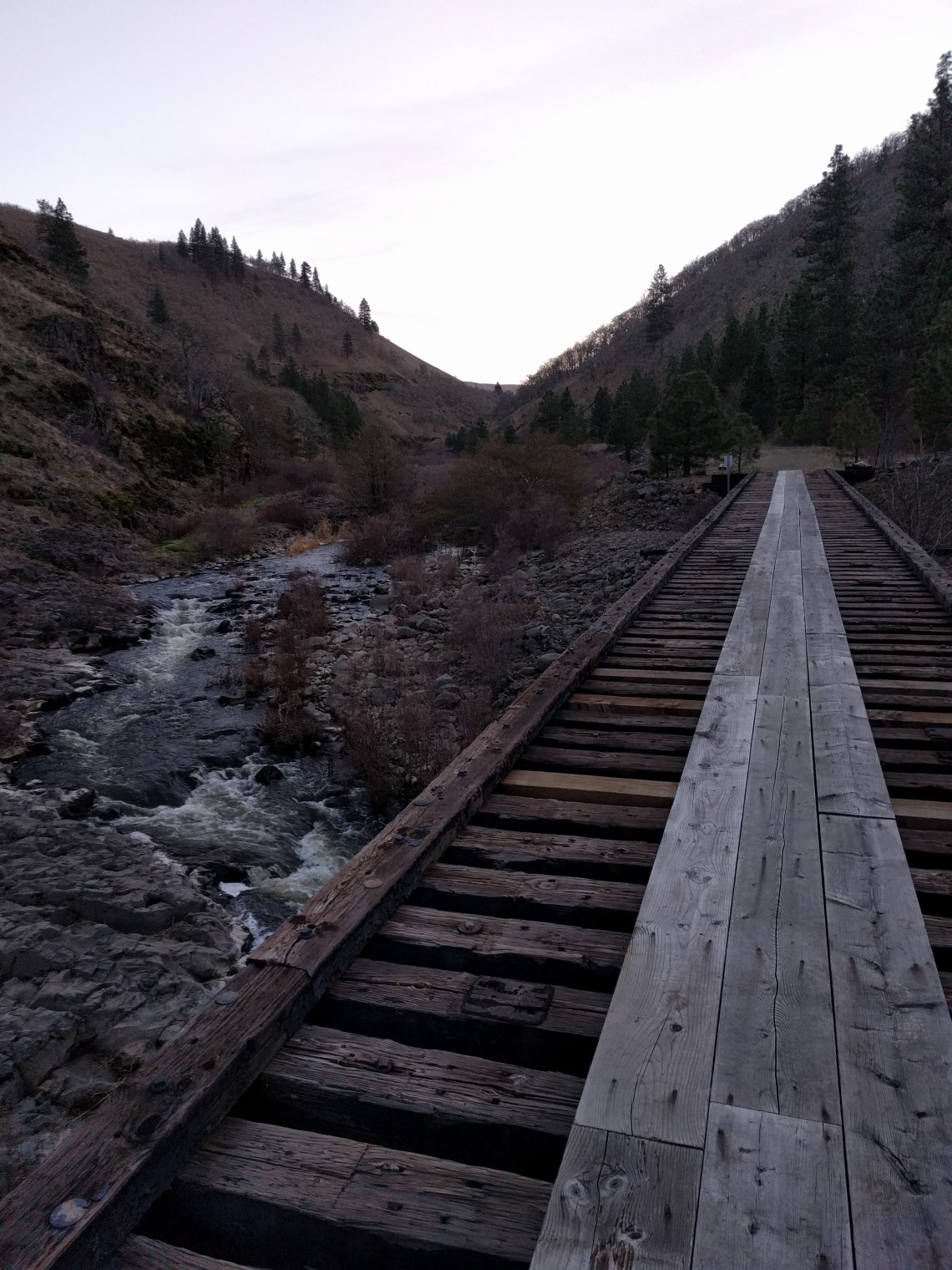 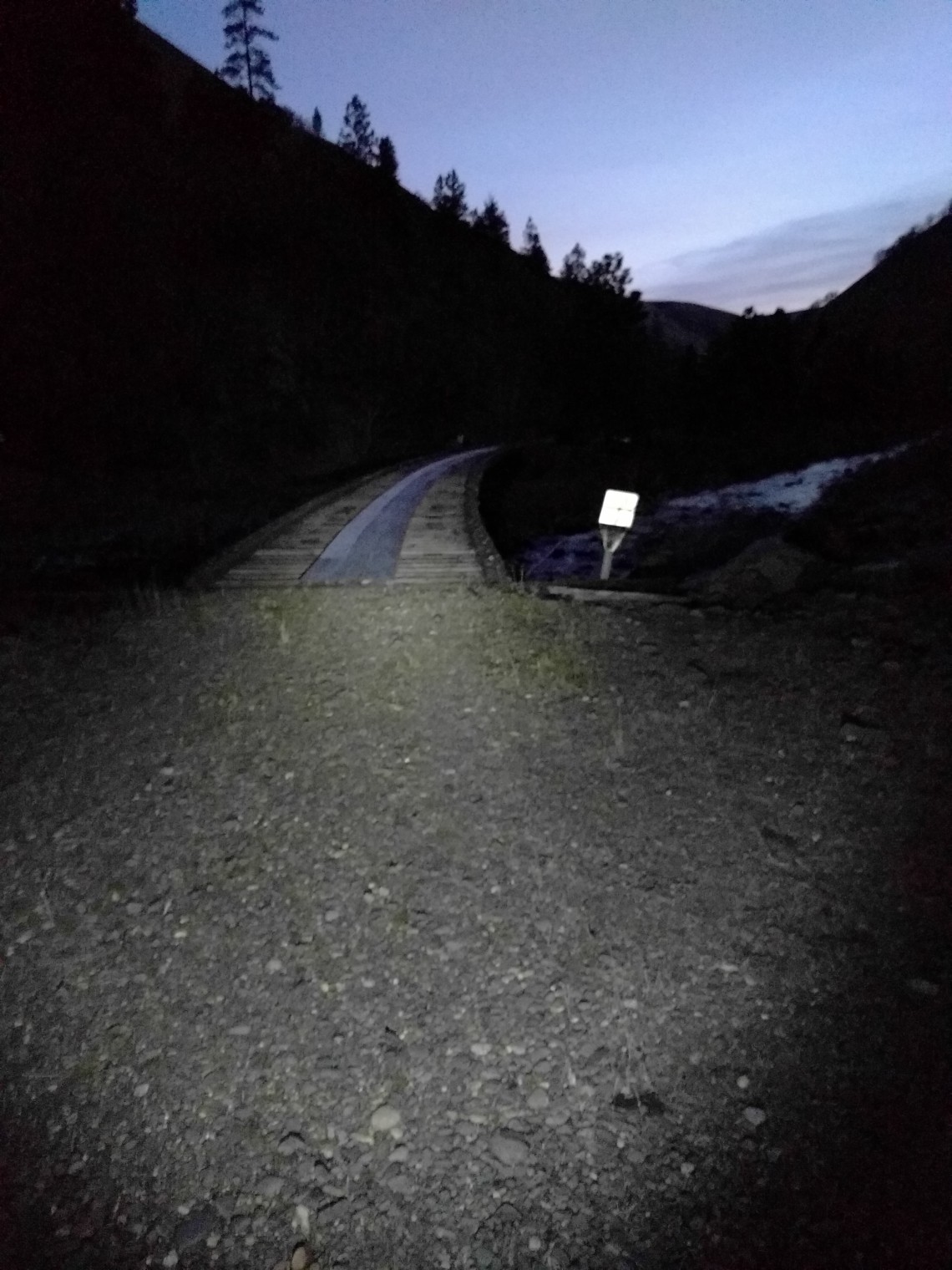 The hardest part of cycling for me is the descents by a long shot.  My hands get super fatigued from riding the brakes and gripping the handle bars.  Its a real issue, on the descent down Dalles Mountain, which is only a few miles, I had to pull off to rest my hands at least five times.  They hurt like hell.  I only have brakes handles on my drop bars, so if I’m upright I can’t get much leverage on them.  If I drop down, I can get much better leverage on the brakes but its kind of hard to crane my head up to see what’s up ahead.  One thing I want to install is in-line brake levers like I’ve got on my road bike.  That way I can stay upright and have good leverage on my brake levers so my hands don’t burn out so damn quickly.

I’m an avid backpacker, and one thing you don’t really need for backpacking is beefy hands.   To get in shape for backpacking, simply walking, running, or stair climbing pretty much does the trick.  Its not that complicated or difficult.  But to be in shape for cycling, you have to *cycle*.  A stationary bike isn’t a good substitute, it  simply cant simulate demands of the descents, your aching shoulders, and the pounding of your delicate ass.

The last bit of the ride was on Highway 14 east into what must have been 20+ mph headwinds.  At one downhill portion, I shit you not I had to pedal just to go downhill.  It was beautiful in the part of the gorge, but dangerous with all the trucks going by and having to go through the tunnel to enter the east side of Lyle. 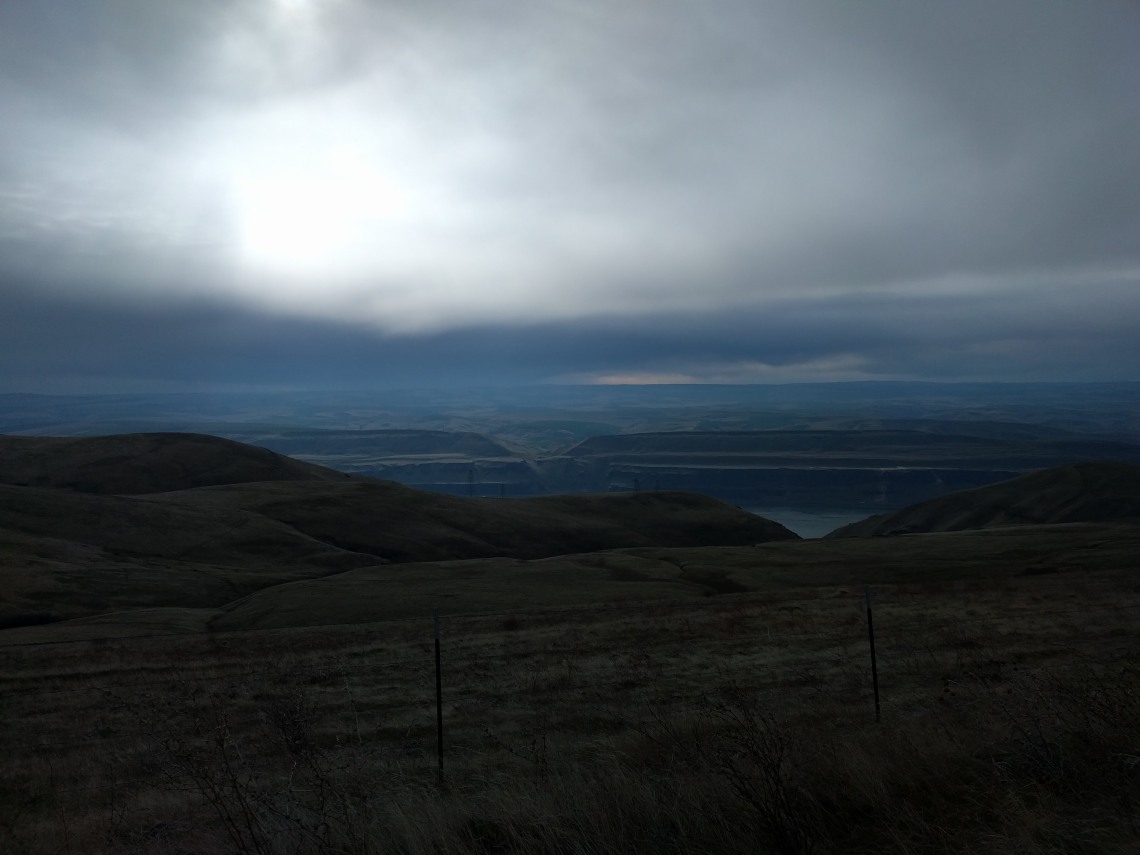 At this point my body was done.  My wrists hurt like hell, my hands were fatigued, and my shoulders and neck were aching.  That’ll teach me to get that out of shape all winter.  All in all my gear performed flawlessly, it was my body that needed to be dialed in!